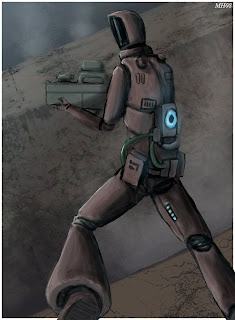 Race: Human [No records of any extra implants besides civilian and military status implants]

Born on Mars, he moved with his uncle at an early age to The Complex [located in the beta gamma cluster 005]. What happened to his parents is unknown. Most likely they where lost in the riots of the Synthetic Uprising. As a young boy he worked at a coffee shop before enlisting to the army. He enlisted to the special task forces of C-core. After years of service protecting important politicians and upholding law and order at the Complex, his squad was picked to defend the digsite from any potential threat (terrorist attacks or strikes most likely). This was a standard procedure ordered by C-cores AI, Akakios.

He´s a quiet man and mostly keeps to himself when he´s not on duty.

He is known to put on a small headband before he puts on his combat armor, it is rumored he does this to be able to focus on the task at hand better, or to 'get in the zone'.

His somewhat sarcastic attitude got him into a lot of trouble when he first joined the army.

Joseph is an excellent team worker and is suitable for the position of team leader. His ability to quickly assess a situation and react accordingly will win him many battles. He also has a very good grasp on military tactics in urban environments.

He is trained with the use of assault rifles, sniper rifles and close quarters fighting. Including melee combat.

Retina screen – shows data to the person, on the retina, making it easier to send and receive information.

various lung, muscle and stamina improvements are also in place.