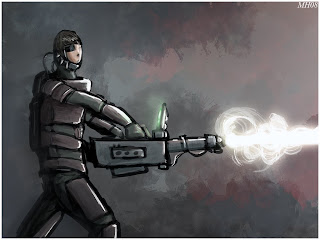 Age: 46
Occupation: Miner. Reassigned to the excavation after an accident.
Race: Synthetic [80%]

History:
He was formerly a Human, but suffered an accident at the factory he used to work at and had to be altered to save. He would probably not have been saved if not for the fact that his grandfather was a powerful and important politician. He was later employed as a Miner just before the excavation started. His brain is connected to a net terminal computer located on his back. This let´s him connect to The Complex Net Terminal. Where he can receive daily updates on his work progress amongst other things, including reading the news, sending messages etc (not on working hours though). He is of a tall build, common for industrial working Synthetics. With his powerful arms he can lift and carry heavy mining equipment that would otherwise require either a vehicle or a small team to transport and operate. This lets him use the custom made mining laser with ease.
Since he is not a complete Synthetic he doesn't suffer as much discrimination as the 'pure' Synthetics.

Personality:
Elif swears. A lot. And he has mood swings that are most likely the result of the trauma from the accident on top of that he is also a very cynical person, known for speaking his mind.
On the other hand, he does perform his job very well. And firing him would upset his grandfather so he is safe. Though sending him out to the dig site was probably a way for his employee to get him out of the way for awhile.

List of implants:
Retina screen – shows data to the person, on the retina, making it easier to send and receive information.
Synthetic muscle and organ replacement - Enhances performance significantly.
Terminal net connection. He can connect to the Core Terminal Net. Information from there is shown on his retina.
Posted by MajQ at 6:10:00 AM